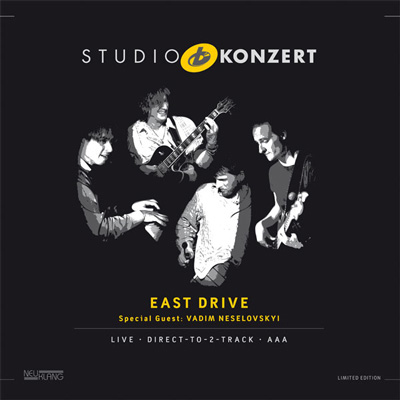 Capturing the sound of an ensemble as authentic as possible is one of the most important and, at the same time, most difficult tasks of any recording engineer. The great Bauer Studios (Ludwigsburg / Germany) are undeniably one of the world´s most famous and experienced places of that capacity. They have recorded such greats as Keith Jarrett Trio, Chick Corea, Oregon, Jessye Norman, Jaco Pastorius (just to name a very few…) over the past sixty years and produced quite a long list of best-selling records worldwide.

On May 13th, 2013 East Drive recorded their first Live-Album (with public audience) directly to a 2-Track tape machine; no overdubs or digital adjustments were made. The band featured the fantastic  New York – based pianist Vadim Neselovskyi, (currently working as a professor at the Berklee College of Music in Boston), and performed music from their first two records, plus a brand new composition. This record is available in a 180g-Vinyl format exclusively, being a special edition for those who are into high-end sound and highest possible quality music productions.  Live, direct, honest and uncompromising.